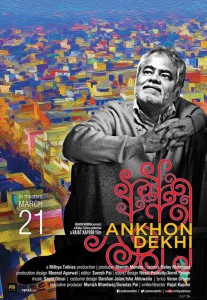 The most awarded film by independent filmmaker Rajat Kapoor follows the life of an ordinary family man in Old Delhi. A particular event brings him to the decision only to believe that, which he sees for himself – the strict adherence to this principle soon means trouble… The film oscillates between melancholy and humor, the brilliant performance by Sanjay Mishra is especially captivating.

In the closing credits, Director and Scriptwriter Rajat Kapoor devotes his film to Mani Kaul and Kumar Shanno – his teachers and also the two most important representatives of the Indian film avant-garde. Unlike the works of these giants, Kapoor’s film doesn’t offer radical formal experiments, but despite its relative stylistic conventionality it provides a significantly different experience than Bollywood. Ankhon Dekhi reminds us perhaps slightly of the mainstream production through the stylized acting.

In this peacefully flowing narrative, the spotlight is directed on fifty + year old Bauji (the part is magnificently carried by Sanjay Mishra, who was until then known only for secondary roles), who, after an incident with his daughter’s suitor, decides to believe only that, which he sees and experiences for himself. He however adheres to his new creed so closely, that he must resign from his job (he can’t personally verify the veracity of the answers he has to give to his clients). Follows then a series of conflicts in the simple home he shares with the family of his younger, more successful and more modern-minded brother (played by the Director).

Kapoor has a longstanding interest in studying characters and interpersonal relations, so it is no surprise that he uses Bauji’s crazy obsessiveness as a means to reflect the society inhabiting the desolate flats in Old Delhi – a place still untouched by modernization and globalization. While the modern Bollywood looks for its heroes among the westernized upper middle class and the wealthy elites, Ankhon Dekhi is dedicated to the people at lower levels of the social ladder, who are faced with the gradual disintegration of the traditional social order to which they were accustomed.

Teetering between humor and a kind of contemplative melancholy, this details oriented film scored very highly with the audience and critics. Apart from Sanjay Mishra’s great performance, journalists hailed Kapoor’s ability to accurately and sensitively capture the lives of ordinary people. 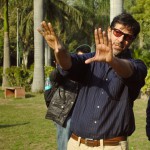 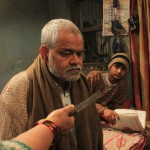 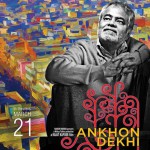 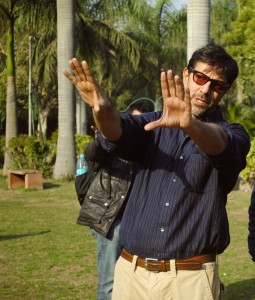 Leading actor of stage and screen Rajat Kapoor (Mira Nair’s Monsoon Wedding, Deepa Mehta’s Midnight’s Children and a host of mainstream and independent Indian films) has also proved himself to be an adept script-writer and director of films in which he also plays a key role.

Kapoor says, “This film has been with me for a long time. It is about my childhood, the alternate warmth and heat of growing up in a joint family. It is also a film about changing seasons, web of relationships. Then I found the peg to hang it on. A man who is willing to stake everything for his belief. He is both a mad man and a messiah; a fool and a guru.”